How Rolling Shutter Control Mode Works And How To Use it

What is Rolling Shutter?

The Shutter is the part of the camera that starts and stops the exposure of the camera to light. Formerly, scientific cameras used mechanical shutters, opening to expose an image, and closing to end the exposure. Mechanical shutters were slow and subject to reliability issues with extended use. Now, scientific cameras use electronic shutters, which are significantly faster, simpler, and more versatile.

Rolling shutter cameras begin their acquisition at the top of the sensor, and ‘roll’ down line by line to the bottom of the sensor. This acquisition involves three processes: signal reset, light exposure, and readout.

The exposure of each row is begun by resetting each pixel’s acquired signal. After the designated exposure time has elapsed for the top row, the readout, marking the end of the acquisition rolls down in the same way. This leaves an area of active pixels that sweeps from the top to the bottom of the camera, with its height determined by the length of the exposure time. With the camera running at full speed, the delay per line is typically between 5 and 25 microseconds per line of pixels, depending on the speed of the camera.

To take advantage of optical techniques requiring synchronisation of scanning of illumination and the camera’s rolling shutter, typically this delay is too short, meaning the rolling shutter operates too quickly for other hardware to keep up. This is where Rolling Shutter Control Mode comes in. 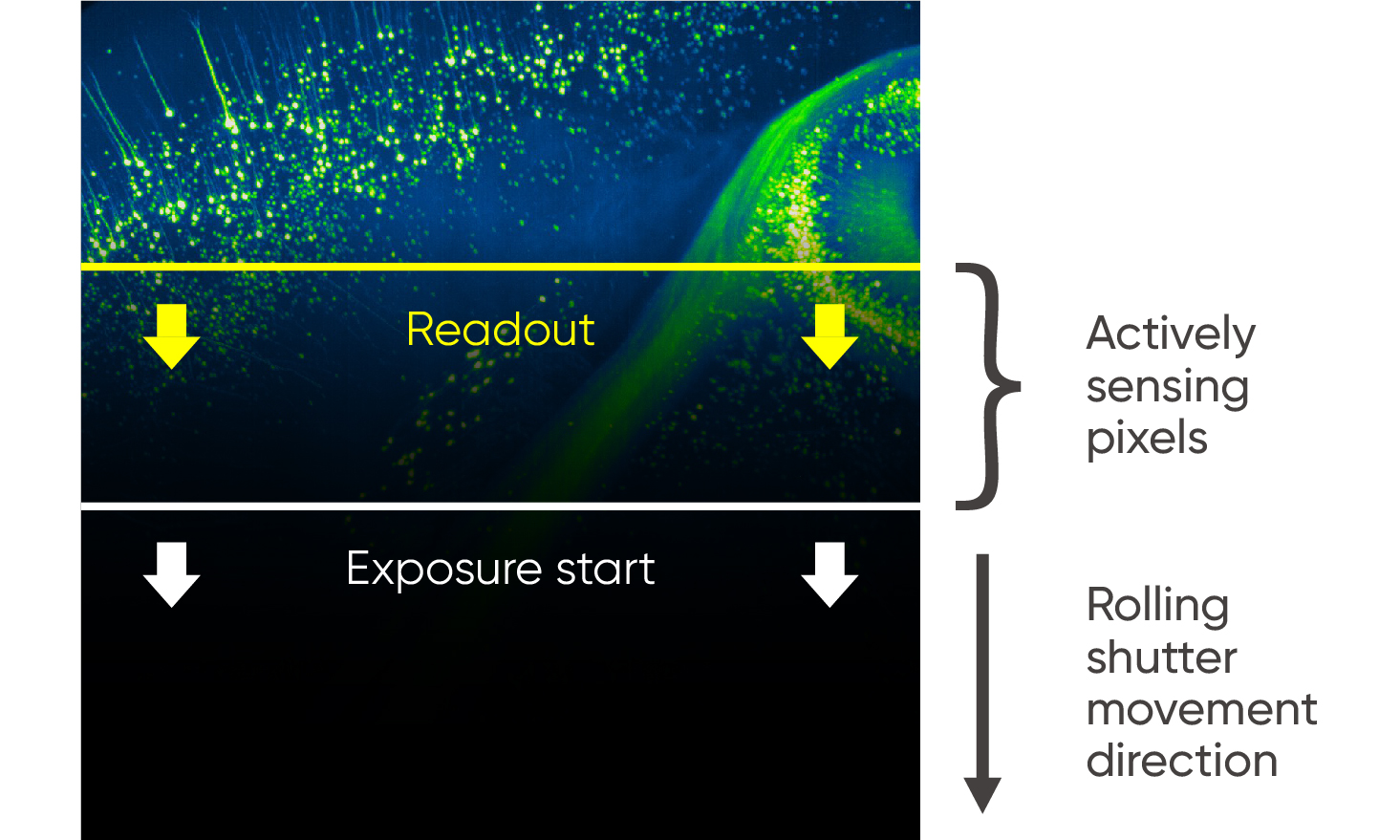 Through onboard intelligence inside Tucsen cameras, the operation of the camera’s rolling shutter can be precisely fine-tuned to synchronise with external hardware. By adding a small additional delay between the reset and readout of each line, the time taken for the active pixel area to sweep down the sensor can be controlled to allow this synchronisation.

Further, the ‘slit height’ of the scanned active area can be fine-tuned. Longer exposure times or shorter line time delays lead to larger slit height. In the case of DSLM, this can be used to match only the illuminated area of the sample, striking a balance between exposing pixels for the maximum possible time for effective signal capture, and minimising out-of-focus light.

With this optional delay, there are now three important variables to understand that determine the operation of the rolling shutter, indicating the height of the area of ‘active’ pixels, and how fast it traverses the sensor.

Line Time: This is the default amount of time the sensor takes to readout one row and move on to the next. It determines the native ‘speed’ of the camera sensor, and can be specified in camera software, or approximated for a given region of interest (ROI) and camera mode by:

Where ‘Maximum Camera Frame Rate’ refers to the frame rate when not limited by either exposure time length or external  triggering rate.

Exposure Time: This determines how long each pixel row is active for, thereby determining the height of the active area for a given line time and delay time.

Line Time Delay: This is how much additional delay is added by Rolling Shutter Control Mode. Rolling Shutter Control Mode allows delay to be added in integer multiples of the line time. For example, if the line time for a camera is 10 microseconds, additional delay per line of 1, 2,  …  up to 8,928, can be added, indicating the number of multiples of 10 microseconds.

Also important is the height of the region of interest (ROI) used, as this will determine the number of lines that the active area must sweep down before resetting.

There are two modes of operation for Rolling Shutter Control Mode, depending on which variable is more important to control.

In Line Time Delay mode, you can set the delay time as specified above. Software can then indicate, for your specified exposure time, what the resulting Slit Height will be – the height of active pixels in the rolling shutter.

In Active Pixel / Slit Height mode, you can set the number of rows of the sensor you want to be active as the rolling shutter sweeps. The exposure time you have specified will then be used to calculate the required Line Time Delay to deliver this slit height automatically.

•  When set to Off, the sensor behaves as normal with no additional delay added.

The number of line time cycles that can be added to the configurable delay varies from camera to camera. The new line time of the camera, after the delay is added, is then:

The parameter value of Rolling Speed is equal to Line Interval Time.

The total readout time of the image is then:

Nrows is the total number of rows of imaging pixels in the region of interest. The frame rate when imaging in this mode depends on the number of lines to be imaged and the line cycle time:

•  When set to Slit Height mode, you can set the size of the active area scanned, given by the number of pixel rows between the "reset" signal and the "readout" signal. The range of Slit Height is 1~2048, in pixel units. To convert this to a physical size, multiply this value by the pixel size from the camera specification sheet.

The software will automatically calculate the required Line Time Delay and Line Interval Time, the formula is as follows:

There are three options for the direction of the rolling shutter:

Up：In the upward scan mode, the rolling shutter starts from the bottom row and scans up to the top row of the first row. Each subsequent frame acquisition starts from the bottom row. Although the order of data capture on the camera is now reversed, the resulting image delivered to software will still show the original orientation, i.e. the image will not be flipped vertically relative to down scan mode.

Down-Up Cycle：When scanning alternately up and down, the rolling shutter starts from the first row at the top and goes down to the last row at the bottom. For the next frame, the rolling shutter starts at the bottom row and scans up to the top row, and so on. The orientation of the image acquired in this mode is the same as the downward scanning orientation.

This function is only available in Down-Up Cycle mode.

The default setting for this parameter is "Yes", which ensures that the first frame of each new acquisition sequence will start at the top-most row and scan down.